A business process will often have many steps. In Workbooks you will implement a series of small 'Processes' each of which combines to implement a full end-to-end solution. Keeping the steps small makes things much more maintainable.

Workbooks Processes come in a variety of forms, either Scheduled, On Change, Web, Integration, Button, Grid or Report Processes. All styles of process invoke Workbooks Scripts to carry out their work.

For each type of process, there is a description field on the right-hand side of the form.

The Scheduler within Workbooks allows you to define how frequently each different Process should be run; this can vary from every few minutes to monthly and be restricted to certain hours of the day or days of the week. For example you might schedule a process to check an external email server for new emails and import these into Workbooks to create new Cases: the 'Email to Case' script within the Script Library can be used to do exactly this.

To summarise the two options for Scheduled Process exit codes:

You can set who is notified on the event of a failure by changing the "Notify User". Make sure that this is a 'real' user with a 'real' email address, with an active login to Workbooks, otherwise a process might fail and no-one is informed so users presume the process is running as normal.  If this user doesn't log into Workbooks every day, it's also worth ensuring that their notifications (within Start > Preferences) are set to notify the user via email so that they don't miss any notifications about problems with a process.

On Change Processes run in the background after the modification or deletion of specified record types. The trigger to invoke the process is called a Listener; you can specify which record type(s) the process 'listens' to in the Listeners section on the process. This type of process is useful if the automation only needs to be performed on change of a particular record type rather than on a constant scheduled basis.

Web processes can be used to implement web services or web pages externally or within iFrames on Workbooks. A web process is often used as an interface on a website for users to update your database without having access to Workbooks itself.

An example of this would be a Contact Us form. The web process would appear on your website in the shape of a web form, then once the user enters their details on the form and hits send, a new sales lead record on your database would be created. Web processes can have all sorts of applications and are used to facilitate a significant portion of 3rd party integrations.

Processes can be invoked from both the User Preference Panel and System Configuration Panel, these are called Integration Processes and are designed to give control to both the user and database wide for 3rd party integrations. Similar to how a Web Process works, a web page can be displayed within a panel as an interface to control your integration.

A Process Button can be added to your records, which, when clicked, initiates a specified Process. For example, you might add a button to a Case record that when pressed closes the Case and automatically sends an email to the Primary Contact using a relevant email template. You can also add a Process on Save, in which a Process is run every time the Record is saved. A simple example demonstrates how you might implement a Process Button to delete all line items from an Order.

A Process Button can run as the current user or as another user that you specify when configuring the Process. This allows users who wouldn't normally have access to a particular part of Workbooks to use any automated processes that you may have in place.

For example, you may wish to create a Case off the back of an Order. A user doesn't need to be granted capabilities to the Cases feature to be able to use this Process Button as it can be configured to run as a System Administrator who has the capability to use all of the areas in Workbooks.

Once you've added a Button process to a form layout, you'll be able to access relevant form layout within Configuration as shown below.

A Grid Process is invoked in the same way as a Button Process - the script is called with the ‘form fields’ from the particular record that it is run from. The same script could be used for both a grid and button process; it would just be invoked from a different place. The process is run by opening a context menu from the relevant row in a grid on Landing Pages or tabs. 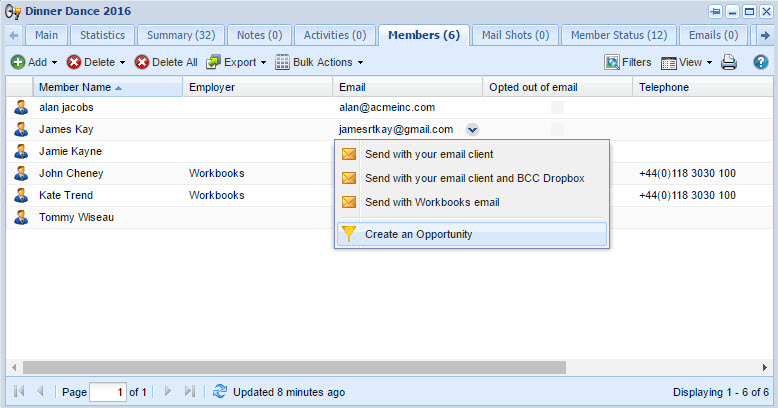 The grid process will also be accessible via Marketing Campaigns tab on the Person record as this also displays Campaign Memberships.

It is possible to perform a Bulk Action on the results in a Report by running a Process Engine Script. This allows the automation of common tasks on a group of Records, or the extraction and processing of data retrieved from a Report. This can be run on an existing or new Report.

To enable a process to be invoked from a report, open the relevant Report in edit mode and open the Automation tab. Click Add Process, give the process a name and select the Script that you want to run.

Once you've set up your process you'll see the Bulk Actions button on the Report. Selecting this will enable you to invoke the process (similar to a User-Invoked Process).

An example of this might be to create a script which creates Invoices for selected Orders. You could then create a Report which shows these Orders, add the Process to the Report and then run the Process.

The report that has a Process will also be accessible via Automation > Processes > Report Processes.

If you use the Test button on a script, a Test Process will be created under the Test Processes tab. A Test Process gives you basic functionality to invoke a script and view the logs.

When a Process is run it is permitted to continue until it uses too much time, memory, or processor time. Set the Maximum Runtime for the process to be something sensible: if a scheduled process loops continuously and doesn't finish no other scheduled process will start until it stops; a process button could appear to "hang" if the underlying process does not complete in a timely manner.

In your business you probably have process workflows that require the same set of actions to be performed on a regular basis. With Workbooks, you can automate common and repetitive tasks, making these ...

What Process Logs are and what information they contain.