Useful information about Workbooks Scripts and the API can be found of the following links below:

Put common code in a single Script and Include it from others.

Click on the links to be taken to that section.

Workbooks Scripts contain the detailed instructions which are run when Processes are invoked to automate your business processes. They are written in the PHP programming language, which is a widely-used scripting language. Most, but not all, scripts will make calls to the Workbooks API. Helper functions make it simple for scripts to authenticate with Workbooks, call the API and log their behaviour.

The Workbooks API Reference specific to your database can be opened directly from Workbooks in one of two ways:

Once you have selected a record type, a button to open the "API Reference" is present near the top and will take you directly to the section of API documentation for that record type. From the reference guide, you can view the metadata for each record type including their Custom Fields. You can also look at the underlying column names for any Reports that you may have created.

Scripts can require ('include') other scripts and take parameters; using these features can make your scripts more maintainable. By defining Script Parameters you specify the options which can be used when invoking the script. If you have code or configuration data which is common to several scripts you should put these in an included script. Scripts are associated with Processes which run them; when a Process runs it creates a detailed Process Log.

Since Scripts are PHP code, the traditional 'Hello World' script looks like this:

Put it in the 'Code' field of a script and use the 'Test' button to run it.

PHP is the most widely-used programming language on the web and is a general-purpose scripting language familiar to many website developers. It is interpreted and simple but most importantly, most web services offer APIs which are accessable to PHP scripts. Sites such as Wikipedia, Wordpress, MailChimp and Facebook are all implemented using PHP. The Workbooks service itself is not written in PHP (it is written in Ruby) but we use this for our external API because it is so well-known and widely supported.

The last line of output from a Script is considered to be the summary of its execution and is highlighted in the Log. Normally you'll use the summary to summarise the work that the Script did on the user's behalf ('Created 4 line items'). If you create a Process Button (create a Custom Form Layout; the Automation tab allows you to add Process Buttons) then this summary is normally shown to the user when the Process completes. If the Script generates warnings then these are the last things to be output and therefore they normally become the summary.

The exit code of a Script is important. A healthy Script should exit(0). One which should be retried later or has warnings should normally exit(1). Other codes are treated as indicating an error; if a Scheduled Process runs a Script which returns a value other than zero or one then the schedule will be disabled so it does not run again automatically. If you want to override this behaviour consider using a try...catch technique to catch errors and deal with them appropriately.

In addition to any included Scripts the system automatically includes the workbooks_api.php file (which contains the Workbooks API bindings for PHP) before running the Script. This acts as the 'glue' between your Script and the Workbooks API. In particular, three variables become available to your Script as it starts to execute:

$workbooks - this gives you access to the API and logging functions. For example, $workbooks->assertGet() is used to fetch records from Workbooks. The first time you access the API within a Script the $workbooks methods automatically arrange a login back to the Workbooks service.

$params - this is an array of parameters as defined by your Script Parameters passing in their values. (In addition to the parameters you define, a small number of internal parameters are also passed which the API binding uses and you can ignore).

$form_fields - this is an array of field names and values which is populated if you invoke your Script through a Button Process, in which case the value of every field in the current Form is passed to the Script.

Alongside these, $_GET, $_POST, $_FILES and $_SERVER are populated.

This version uses the $workbooks->log() function which is the preferred way for a Script to add entries to the Log. The function takes up to three parameters (two are specified here: a string and an array). The first (mandatory) parameter is simply a string which should go into the Log. The second parameter is optional and is an expression which should be dumped (normally this uses var_export()). The third parameter is also optional:the 'log level' and defaults to 'debug': you can also specify 'error', 'warning', 'notice' or 'info'.

If you use echo() or simply output text outside of the <?php .... ?> tags then it ends up being logged at 'debug' level.

Before running the Script above add a couple of Script Parameters and then use the 'Test' button. You will be prompted for parameter values and then shown the resulting Log. If you create a Process Button for this Script you will also see a fully-populated $form_fields array.

As an experiment you could find out more about the Script's runtime environment by running echo phpinfo(); within your Script.

Many other functions exist in the Workbooks PHP API including versions of the above which return the response without checking for errors: $workbooks->get(),$workbooks->create(), $workbooks->update() and $workbooks->delete(). If you are interested you can take a look in the workbooks_api.php file to see how these are implemented and discover some other useful functions.

The API allows you to operate on up to 100 records at a time. You can operate on more records by specifying '_start' and '_limit' to your code. The example in the below section "Sorting Results via the the Workbooks API", gives an example of this.

Each time these functions are called the Log contains the full request/response details for that interaction with the Workbooks service; you will also see additional log records for the side-effect calls to the login and logout Workbooks APIs.

Sorting Results via the Workbooks API

The Workbooks API allows you retrieve records and sort the order in which they are returned within the logs. Within the $find_people filter array that is passed into one of the functions above (assertGet, assertUpdate etc), specify '_sort[]' and '_dir[]' as a comma separated array as shown below.

Notice that in the example, we have sorted by the town first and then the ID, rather than sorted by the ID then the town. If any of the fields that you are sorting by are unique, you may get obscure results returned. Therefore, you should sort by the non-unique value first. Using the example, the results will return all of the people whose name starts with 'A' and they have a town specified. It will group all of the towns together in alphabetical order (first sort parameter) and then sort them further by the ID (second sort parameter) giving the below results in our logging: 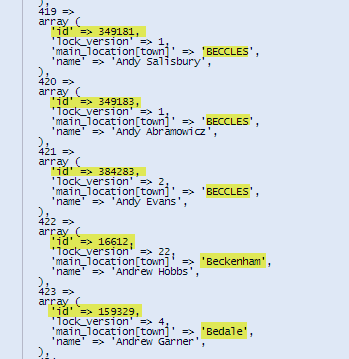 Desktop Actions via the Workbooks API

The Workbooks API also includes a number of useful functions that allow you to interact with the Workbooks User Interface from a Process script.

Display a Message: There a number of ways to display a message to the user whilst using PHP, the most common being "echo". It's worth referring to the PHP manual for the most up to date functions on how to do this. Alternatively, there are two functions specific to the Workbooks API which will allow you to display a message with an "OK" button to the user when your script runs. These are:

If multiple output messages are created, the last one generated from your script will be displayed.

Open a Record: A script can be written to open a record within the Workbooks User Interface. When the script is executed, the window will open in the current session. To do this, include one of the following functions in your script:

Notice that it is possible to open the record by specifying just the Object Reference or if you prefer you can specify the ID. If you use the ID, you must also specify the record's type in the format Private::Crm::Organisation or Private::Accounting::Quotation. The types for other records can be found by opening the API Reference, here.

Open a Window: A script can also open another window in Workbooks such as a Web Process to prompt for additional information or a blank record that the user must fill in the details and save to your CRM system.

Change to another Tab: It is possible to implement a workflow using scripts if required. Within the current window that the script is being executed from, you can make your script move to another tab such as an iFrame to prompt your users to complete the next part of your business process. To do this, include the following function in your script:

Close Window: A script can close the current window when it is executed if required. To do this include the following function in your script:

Open an External URL: A script can open up another tab in the browser and load another website if required. To do this, include the following function in your script:

Here is an example which calls the API to fetch and then delete up to 100 line items from an order.

Many further examples can be found in the Script Library: go to Configuration > Automation > Workbooks Scripts and Script Library is a tab on the list of Scripts.

What the Script Library is and where to find it in Workbooks.

Scripts are run "at arms length" in a separate environment known as a "Jail". This page runs through what this means in more detail.

How to enable External Access to your scripts, and what the Workbooks IP address ranges are.