After a Webinar has concluded, the integration will automatically update Workbooks with information about the session. A Scheduled Process called “GoToWebinar – Retrieve Webinar Data” is used to retrieve the data which includes:

GoToWebinar provides a list of people that attended the Webinar after it has completed (where the Event End date/time has passed). For each Webinar Attendee, the integration searches for a corresponding Event Attendee that has a matching email address. If a record is found, their Status is updated to Attended and the amount of time they attended the session in seconds is also stored. Any remaining records where the Status is still set to Registered, will then be updated to Absent.

NOTE: For On Demand Webinars, Event Attendees are updated as they watch the webinar recording each time the sync runs and up until the End date/time. There may be a period where some Event Attendees are set to Registered and Attended. After the End date/time, the status will change to Absent if they Registered, but not watched the On Demand recording.

NOTE: Attendees that were added directly into the Webinar via the GoToWebinar UI and not invited by the Workbooks integration will not be updated in Workbooks. Event Speakers statuses will also not update automatically.

In addition to the above, a Workbooks Event can be configured to automatically send out Attended or Absent emails for each Event Attendee record to follow up after a Webinar. See here for further information.

GoToWebinar allows Attendees to ask questions during the session. The organiser/panelist can either answer the question during the Webinar or defer to after the session. Any question that is asked will be stored as an Activity in Workbooks as follows:

Workbooks users can be subscribed to Queues to notify them of when a new record is added to that Queue. This can be used to drive further workflow to follow up with the attendee after the session as part of your own business process.

GoToWebinar captures some key metrics about a Webinar during the session. These metrics are stored against the Workbooks Event after the Webinar has completed.

The statistics stored as part of the integration are as follows:

Online Activities are created for each Event Attendee have the status of Registered.

These are the fields set on each Online Activity record: 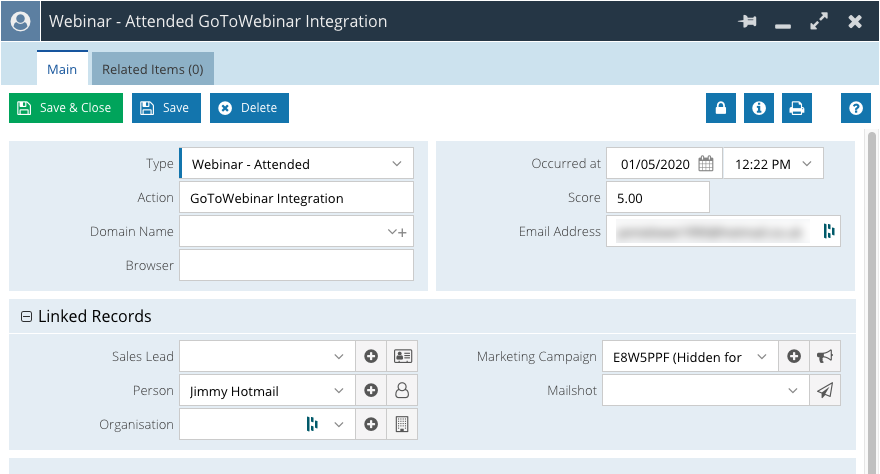 The Score field value is configurable based on whether the person Attended or was Absent from your Webinar. You can assign a value to the following fields on the Event form:

When an Online Activity record is created, the value is looked up from these fields to set the Score field value.

These records can be used to drive other business processes. For example, you can measure engagement via a scoring mechanism, and use it to drive the automatic creation of Opportunity records at a given threshold using the Workbooks Process Engine and a bespoke script to meet your business needs.

When a session is run in GoToWebinar, it can be recorded. The recordings can then be used to drive future On Demand Webinars where registrants can sign up to access content. See here for more information on how to schedule this type of Webinar from an Event record. When this process runs, any recordings that are available in GoToWebinar are added to the picklist called "Webinar Recordings" automatically.

NOTE: The first time the Retrieve Webinar Data process runs, it will sync up to 1 year of recordings into Workbooks. After the initial sync, only new recordings are added. Existing recordings are not removed automatically if they are deleted from GoToWebinar.