Running and Reviewing your Import

When you're happy with all the settings click Run at the top of the screen. Your import will be placed in a queue and you'll be notified when it's ready for review. In the meantime, you can carry on using Workbooks as normal.

The notification will look similar to this:

When you receive the notification, click Open to generate a screen similar to the one below. 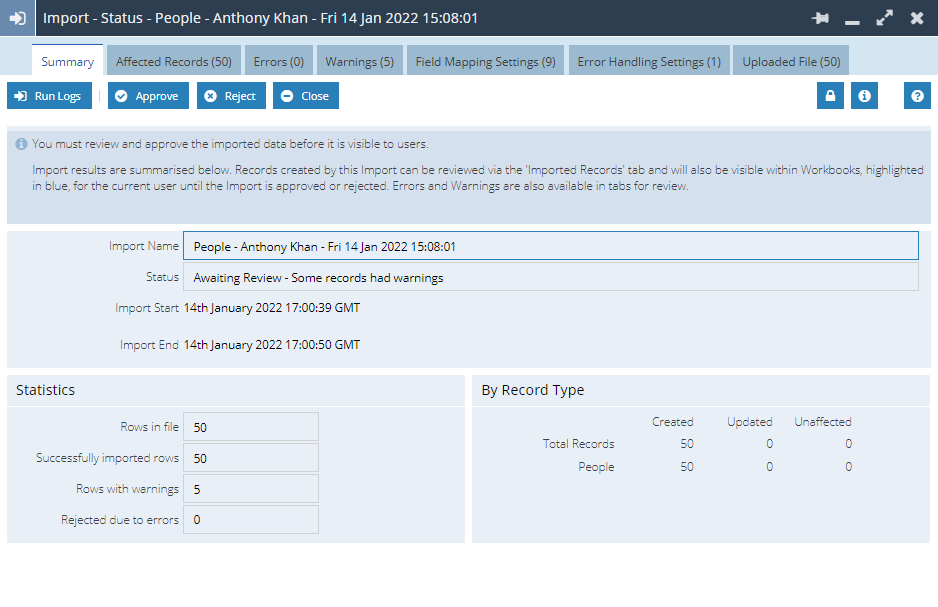 This screen gives an overview of the import, and statistics around how many records were imported, how many errors received etc. More information on the all the tabs can be found on the page Import Management.

Once you're happy with the imported data click Approve. This will complete the import and make your records visible to other Workbooks Users.

If you're not happy with the import you can click Reject, which will remove all the records created via your import and reset the status of the import job to Not Run.

Until the import is either Approved or Rejected, the records will be visible in Landing Pages (highlighted in blue) but only for the User carrying out the import.

NOTE: It is important that all your imports are either Approved or Rejected and are not left in any other state. Approving an import will change the Status to Complete and Rejecting it will change the Status to Not Run.  Leaving an import in any other state is likely to cause problems on your database and possibly corrupt your data.

When an Administration User logs into a database and there are imports awaiting a response within that database, there will be a warning banner displayed on the top of the screen similar to the one below.

By clicking on this banner the user will be directed to an import Landing Page filtered to show the Imports that require attention. This includes information on when the import was created, run and the current status of that import.

By clicking on one, the user will be directed to the screen in which can Review your Import.