HubSpot is a tool for managing your inbound marketing; you can use it with Workbooks as a source of leads.

When you set up synchronisation between HubSpot and Workbooks, you set up a bi-directional connection between the products: as your HubSpot contact data is created or modified it is copied over to Workbooks leads, and vice-versa. This is explained in detail towards the end of this page.

The synchronisation is achieved using a scheduled process which is configured with your HubSpot credentials. Setting this up requires you to:

You need to be logged into Workbooks as a user with System Administration capabilities which will be the user the synchronisation will run as.

Integration with Workbooks can only be achieved if you're using either the Professional or Enterprise edition of HubSpot.

You must also be using an edition of Workbooks which includes Automation; in practice, this means you cannot be using Workbooks Free Edition.

2. Copy the "HubSpot Integration" Script and run it as a Web Process

The form looks like this; here two custom fields which are necessary for the synchronisation process have not yet been created: 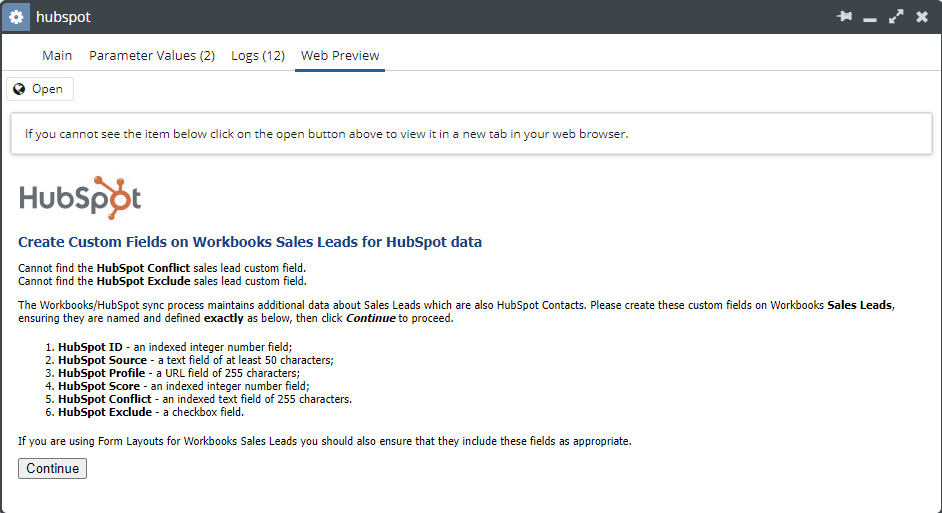 Create fields as prompted by the installation process (see below for more details).

The Web Process now prompts you to enter your HubSpot "Hub ID" and to allow Workbooks to access your HubSpot Contacts.

Set the HubSpot Exclude custom field to 'checked' (true) on any leads which you do not want synchronising into HubSpot. This might be all closed leads; use bulk update to achieve this.

The synchronisation will now run indefinitely or until you remove access to your HubSpot system. A custom field on Sales Leads, HubSpot Conflict, is populated with the names of any fields whose values differ between Workbooks and HubSpot: periodically you may choose to review records where this is not blank and make them the same in both systems; having made such a change the next synchronisation cycle will resolve the conflict.

How Workbooks synchronises records with Hubspot

HubSpot integration runs through a series of phases:

When the HubSpot web process runs during installation it creates a set of API Data containing the system configuration before it takes the user through creating a set of required custom fields. The key 'hubspot_custom_properties' defines a set of custom fields to be created in the HubSpot system. The key 'hubspot_field_mapping' defines the mapping between Workbooks and HubSpot fields.

These custom fields required by the integration, and the user is prompted to create them by the HubSpot web process:

Some field mappings are special:

If a Workbooks Lead is deleted then any associated HubSpot Contact will also be deleted.